My name is John Crane. Was born on the 7th of December in the year of our lord 1744 in Braintree, Massachusetts. I have been a member of the Sons of Liberty for many years supporting independence for the American colonies. Too long have we been taxed to pay for wars and debts for which we have no interest whilst having no representation in the British parliament.

It all began with the Townshend Acts which were a series of act passed by the British government in 1767 after the repeal of the Stamp Act of two years before. These acts were passed under the false impression of John Townshend, the Chancellor of the Exchequer  that the colonies had objected to the use of a direct tax such as the Stamp Act required and that they would not object in the same way to the taxation of imports. Taxes were levied on the import of items such as glass, lead, oil, paint, paper and tea. A group of Boston based merchants and traders agreed not to import or export items to Britain in objection to the new acts. To maintain order and enforce the new taxation rules a garrison of British regulars arrived in Boston in 1768. Over the next year and a half tensions between the two sides began to mount which ended with the Boston Massacre. Called to disperse an angry crowd of civilians protesting at Customs House the soldiers in all the commotion either mis-heard or disregarded the command of ‘Don’t fire!’ with five civilians being killed. Captain Preston and eight of his British soldiers were tried for murder all all went on to be acquitted on the grounds of self-defence.

Five years later when the Tea Act was passed the merchants of Boston once again came together to take a stand against this continued taxation without representation. The Tea Act gave the British East India Company a monopoly on tea sales in the American colonies. The British Government had passed this act to support the ailing East India company who were near to financial ruin due to the unstable political situation in India and Europe. In reality this was no new tax as tea had been one of the items taxed as part of the Townshend Acts. The Townshend acts had been repealed in 1770 with only a tax on tea remaining to maintain the British Parliaments right to tax the colonies. What angered the American colonists was the government sanctioned monopoly preventing colonial merchants from trading.

Prior to that night in December 1773 protests in other colony ports had been made by leaving boxes of tea on the docks to rot. However, in Boston the Sons of Liberty refused to let the ships unload their cargo of tea while the Lieutenant Governor and Chief Justice of Massachusetts refused to let the ships leave Boston without unloading their cargo.

Plans were in place and on 16th of December in 1773 myself and over a hundred other men snuck into Boston harbour. It was dead of night so identify those who were brothers we wore feathers in our hats. We crept aboard the three ships in harbour and set about bringing the boxes of tea from the ships holds, hacking them open and emptying their contents into the water.

Now what happens next I can only relay by word of mouth as I suffered the most awful accident when in the hold. One of the ropes being used to raise the heavy tea chests snapped causing one of the boxes to hit me on the head and I remember no more. I awoke the next morning with a dreadful head pain surrounded by wood chips. My fellow brothers had took me for dead and had hidden me in a carpenters to bury the following day. What a shock they got when they saw me in the tavern sipping ale early the next day.

The tea from the ships had been dumped into the shallow sea as it turned out that we had chosen a day with not only a full moon but a very low tide.

What became of me? I joined the militia in Boston and went on to take part in the Revolutionary War. I later moved to Rhode Island taking part in the Battles of Lexington and Concord and was given the honour of being made commander of the U.S. Corps of Artillery. After I retired I move to Maine. 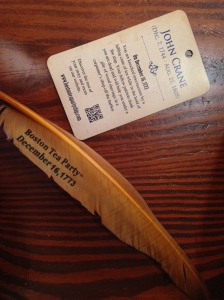